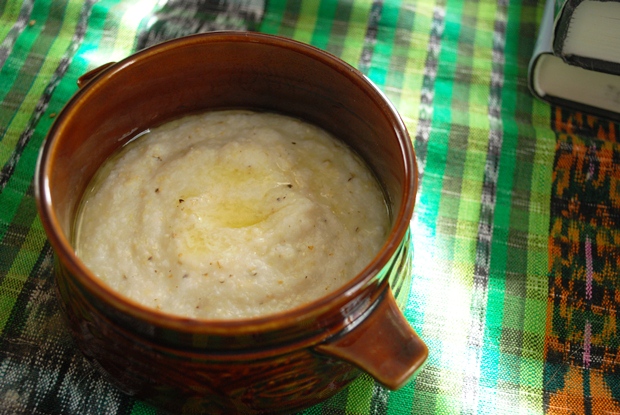 Home fries, grits, or hashbrowns?  For me, it’s always grits and always will be – even though I like home fries a little better.  The reason for this came home to me a few months ago when I was ordering breakfast with my brother.  We both chose grits and then surprised each other by admitting that we ordered them due to love, not taste. Dad loved grits.

He was a mid-20th century boy, raised in the South (about 45 miles from Gainesville). My best early memory of grits is at the yellow laminate kitchen table of his parents’ kitchen, the smell of Nettles sausage vying with the reek of chewing tobacco, the deep yellow, scrambled eggs cooked barely solid, butter melting over the speckled grits, and the country music station playing on the radio on the shelf above the fridge.

If your grits don’t have speckles and don’t take 20-30 minutes to cook, they are processed “quick grits.” Lawdy, don’t do that if you can help it. Real grits have more of the “stick-to-your-ribs" quality,and are worth the wait. My dad’s childhood took place during the heyday of grits, and all over the South people could carry their own dent corn to the local mill to have it ground for cheap.  The fine grounds became cornmeal and went into cornbread, another staple. The grittier grounds were… grits. Hardy grits got many southern families through the Civil War and the Depression, and were a staple for native people long before Europeans arrived.

Their long history and the fact that they haven’t really caught on in the rest of the country renders them even more precious to Southerners. You can get  organically-grown, local grits - the kind my grandmother bought - from Greenway Farms in Alachua.

HOW TO FIX SOME GRITS:  To prepare them the traditional way, simply pour one cup of grits and ½ teaspoon salt into  to 4 cups of boiling water. Whisk as the water returns to a boil, to keep them from lumping together.  Simmer for 20-30 minutes (this makes enough for a grits-loving family of four).

If you are new to grits, and want to make them a little richer and fancier, substitute milk for half, or even all, the water.  These are creamy and delicious even to neophytes.

IMPORTANT: However you cook them, a visible dollop of butter melting on the top is a must.