Home Archives Profile Subscribe
To be a laboratory
Welcome Morning 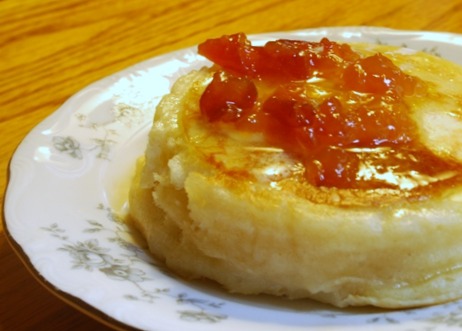 I had no idea! These are absolutely brilliant (as they say). I had planned, instead of this, to leave first thing for an early morning walk in beautiful Kanapaha Botanical Gardens, but I woke up at 6am to the sound of pouring rain. The walk was to kick off the weekly "day of rest" I have promised myself since New Year's Day. Without a clear plan, I will (like most) fall right back into doing all those things I'm worried won't survive without my attention for 24 hours - none of which seem more important at the moment than eating crumpets.

It must be all the Brits I've been keeping company with lately via the media - several weeks of the wonderful Downton Abbey, followed by a recent evening of tea, knitting, and Sense and Sensibility with a young friend, then "Another Year" at the our own Hippodrome.

Crumpets. I love the word, but had no idea what they actually were. Turns out they resemble what we call "English muffins" - but about as much as loaves, fresh from the oven, resemble Wonder Bread. Softer and more flavorful, hot off the griddle they perfectly melted a pat of butter and a spoonful of homemade marmalade. And they didn't take long. While the batter rose, I had time to feed the chickens, walk the dog, and quickly do the few dishes required to prepare them. Then upstairs with my tea and crumpets and the Sunday paper to start the Sabbath. I highly recommend it. Now I will resist the urge to write and check off "crumpets" on Sunday's purposely empty To Do list.

Heat milk until just warm - too hot and it will kill the yeast. Stir in sugar, yeast, flour, and salt. Whisk till smooth. Place in warm oven to rise (I always raise bread in a warm oven - heated to no more than 170. Turn the oven off before putting the bread in and set the time for 25-30 minutes - instead of the hour- hour and a half that's often recommended for rising time; it's never failed.) After 25-30 minutes, stir baking soda into 3/4 cup of water and whisk into mixture. 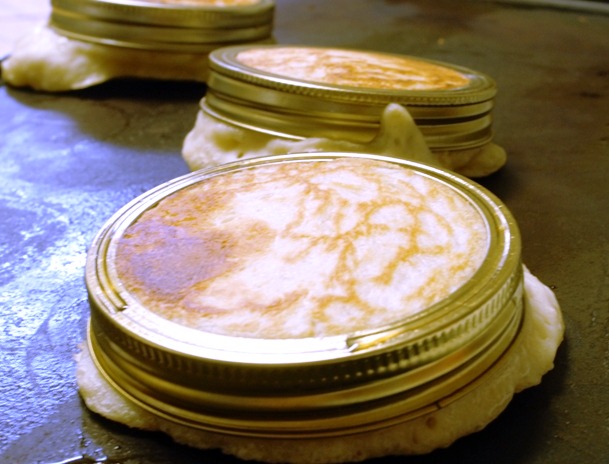 Melt butter on a griddle or in a large skillet. Spoon batter into molds. I used greased, wide-mouth jar lids. You could also save small cans for this (tuna size), from which you've opened both ends with a can opener. Or you could buy so-called "egg molds." Free form works, too, but they're not quite as pretty.

Flip them when bubbles begin to form on top (2 minutes or so) and bake on the other side for no more than a minute or 2.

Serve with butter and marmalade and the Sunday paper.