The CIW and Publix - Davids and Goliath

Last weekend a group from the Coalition of Immokalee Workers visited our house and we joined them at their protest at Publix, our area's largest supermarket chain. The CIW has approached the corporation asking that they join other large businesses in supporting fair labor practices for tomato pickers by doing the following:

The grinding poverty these folks live with has left them vulnerable to terrible abuses by employers. There have been seven cases of slavery convicted in the last twelve years - one less than a year ago. The support of big chains like Publix would go a long way in ensuring that this never happens again.

As a family and community, we look very forward to our visits from the CIW. They are kind and hardworking people, and their cause is so unquestionably just. What an irony that the folks who put food on our table cannot afford to feed their own families. And what a food system that ignores the human rights of one of its most vital components. It seems so simple - just a penny more a pound, and some basic human decency.

Truth be told, we don't shop at Publix very often these days, preferring to patronize a small grocer that sells local food. But I have often in the past, and most of the folks I know here in Gainesville do. I am sending the following letter to the mangers of our local Publixes and to the corporate office. If you live near one, will you consider doing so as well? Also, if you can, please take a moment to listen to CIW member Gerardo's eloquent and moving plea for justice last Sunday at a local church (it's between minutes 29 and 35 if you don't want to listen to the whole service :)).

I have shopped at Publix often in my life. As a child I accompanied my mother  on her trips to the Plantation, Florida store.  As an adult, I have lived near and shopped at your stores regularly and not only because of familiarity. I have appreciated your efforts to employ developmentally disabled folks in our community. I have seen firsthand how going that extra mile to recruit, train, and support them in their work has been helpful to them and heartwarming to shoppers.  In addition, your recent efforts to offer “greenwise” products that are more sensitive to the environment and, at some stores, local produce has been appreciated by me and many others.

For these reasons, I was surprised to hear that you refused to talk with the Coalition of Immokalee Workers to discuss their requests for minor changes that would raise their standard of living and help them support their families.  I understand workers earn only 40-50 cents for every 32 lb. bucket of tomatoes and must pick 2.5 TONS of tomatoes in order to earn a minimum wage during a typical 10-hour day. Their poverty leaves them vulnerable to the most exploitative employers and there have been some terrible labor rights abuses, including modern-day slavery.  Since 1997 there have been seven convicted cases of slavery involving 1000 Immokalee farm workers – the most recent of which was less than a year ago. As purchaser of tomatoes from both Six L’s and Pacific Growers, it would be especially helpful for Publix to work with the CIW to ensure that farm workers are never again held against their will, beaten, and deprived of their pay. You seem to be the kind of business who would want to stand against this injustice.

A number of other corporations have recently done this. Yum Brands, McDonald’s, Burger King, Subway, Bon Appetit, and Whole Foods are all working with the CIW to directly improve the wages and conditions in their tomato supply chains. Many of us are extremely disappointed to see that Publix has responded to their request by announcing that “we respectfully decline the opportunity to participate in this program.”

Please reconsider. You can help ensure fair wages and dignity for the farm workers who pick Publix tomatoes by working with the CIW to:

I am sure you have found your other efforts toward justice – employing the disabled, providing environmentally friendly products, and offering local food at some locations – to also be good business practices.  “Fair-trade” is also an idea whose time has come. You will keep the customers you have and attract new ones by joining this movement.

As a Publix customer, I look forward to Publix living up to its reputation as a good neighbor by partnering with the CIW to end the human rights crisis in our backyard. 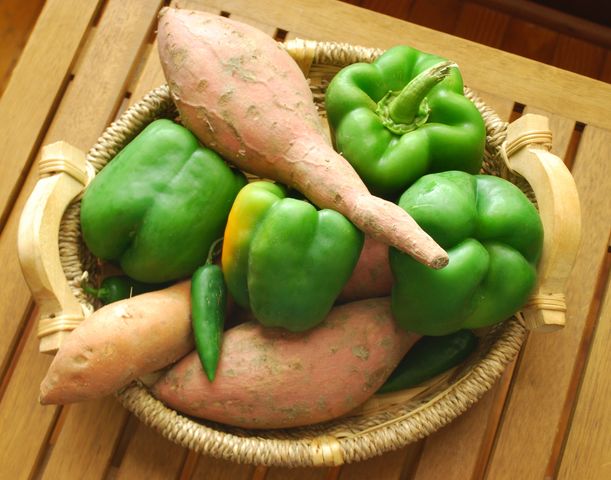 This time of the year, the pickin's are still pretty slim at the market and in the garden. It's been hot, mostly, and dry. Fall seedlings planted in early October are not quite ready - so you see sweet potatoes and peppers... and not much else.

Our cafe menus reflect the situation. More beans, less veggies... even the muscadine grape harvest has ended. While the farmers at the market assure us that the bountiful fall harvest will begin in 4 - 6 weeks, we are digging into the back of the recipe box for hardy soup that's heavy on the dried bean. Baked Bean Soup is a favorite.

Saute onions in olive oil till transparent. Add chopped green peppers and sweet potatoes, sprinkle with chile powder and stir in oil for a minute or two. Add water, mustard, and tomatoes, and bring to a boil. Add beans, vinegar, and molasses. Salt to taste. Serve with grated cheese if desired.

We served ours with oat-flax bread and our own variation of Boston brown bread (and the last of the muscadines...).

You need a swig of Jamaica 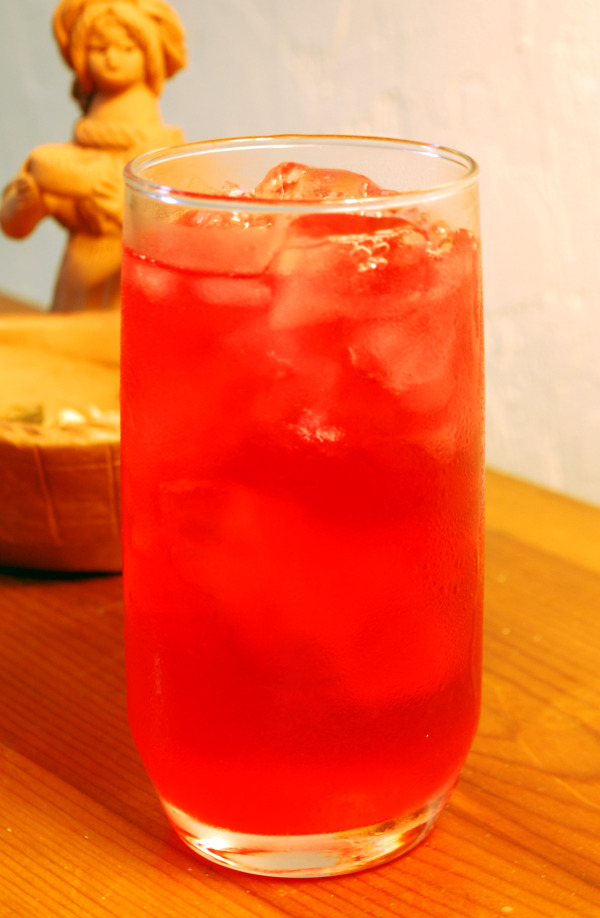 It is so very hot here - nearly breaking a 100 year-old record. Today the heat index is forecast to be 102. We have also had half as much rain as we normally do so far in October. AND the owner of our empty lot garden has turned off the water. So. Only the hardiest of heat-loving plants are surviving.

One of these is "Roselle" aka Jamaican Sorrel or Hibiscus sabdariffa, among other things. It is a beautiful plant - red stems and calyces, dark green leaves, lovely yellow hibiscus flowers with pink centers. In the past we have harvested these in the late fall and early winter, but these are already producing the prized calyces (stress?) and so we are picking them now.

These calyces - the base of the flower - are the source of a famous Jamaican holiday drink called "Jamaica" (pronounced huh-my-cuh). There are a number of recipes for this but all involve boiling the sepals (removed from the calyx) for 10 minutes or so and adding spices and sugar (and often rum). Here's a typical recipe; you can google to find others.

We made a lighter drink by removing the sepals from about 40 calyxes and boiling in a quart of water for ten minutes, straining the sepals out, adding sugar (quite a bit) and then another quart of cold water. It makes a nice tea, reminiscent of Celestial Seasonings Red Zinger. Very pretty and delicious over ice. A nice island treat for this extended summer we are having.

A Speech to the Garden Club of America

(With thanks to Wes Jackson and in memory of Sir Albert Howard and Stan Rowe.)

Thank you. I’m glad to know we’re friends, of course;
There are so many outcomes that are worse.
But I must add I’m sorry for getting here
By a sustained explosion through the air,
Burning the world in fact to rise much higher
Than we should go. The world may end in fire
As prophesied—our world! We speak of it
As “fuel” while we burn it in our fit
Of temporary progress, digging up
An antique dark-held luster to corrupt
The present light with smokes and smudges, poison
To outlast time and shatter comprehension.
Burning the world to live in it is wrong,
As wrong as to make war to get along
And be at peace, to falsify the land
By sciences of greed, or by demand
For food that’s fast or cheap to falsify
The body’s health and pleasure—don’t ask why.
But why not play it cool? Why not survive
By Nature’s laws that still keep us alive?
Let us enlighten, then, our earthly burdens
By going back to school, this time in gardens
That burn no hotter than the summer day.
By birth and growth, ripeness, death and decay,
By goods that bind us to all living things,
Life of our life, the garden lives and sings.
The Wheel of Life, delight, the fact of wonder,
Contemporary light, work, sweat, and hunger
Bring food to table, food to cellar shelves.
A creature of the surface, like ourselves,
The garden lives by the immortal Wheel
That turns in place, year after year, to heal
It whole. Unlike our economic pyre<
That draws from ancient rock a fossil fire,
An anti-life of radiance and fume
That burns as power and remains as doom,
The garden delves no deeper than its roots
And lifts no higher than its leaves and fruits.

This soup was eaten so quickly, I didn't have a chance to photograph it!

It's a variation of a wonderful recipe from a book of wonderful recipes: Moosewood Restaurant Daily Specials.  I'm often inspired by recipes but always end up making changes due to the quantities (multiplying by 20 or 30) and our desire to use local ingredients. This is the early October version:

Saute jalapenos and onions in oil in soup pot for about 10 minutes - until onions are translucent. Add spices and saute a minute more.

Add the potatoes, pepper, and water and bring to boil. Lower heat and simmer covered for about 15 minutes.

Addd tomatoes, corn, and squash. Bring to a boil again and then simmer for about 5 minutes.

Remove about 3 cups of the soup from the pot and combine with cold milk and room temperature cream cheese. Pour into a blender (the milk will lower the soup temp which will be better for the blender). Puree, then add back to soup. Gently reheat if necessary, stirring constantly.

Garnish with cilantro and cheese if desired, and a dash of "hot sauce" if you like it spicier.