Home Archives Profile Subscribe
Fun things to do with bread dough and a bunch o' veggies
Local cheese - so good... 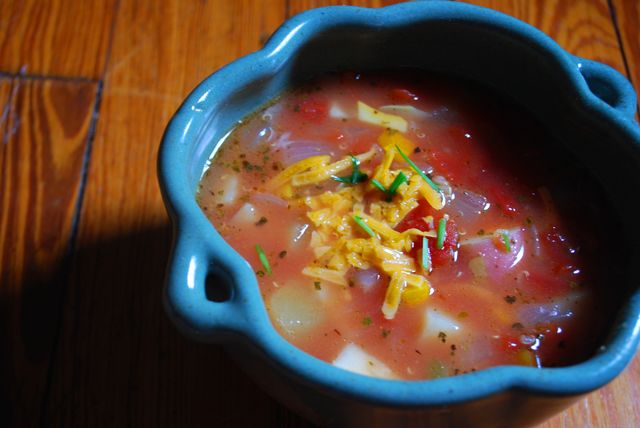 I know I'm going crazy with the recipes lately, but 'tis the season. Today we are serving "South American Quinoa Stew" at the cafe - South American because nearly all the ingredients originated there. We got ours from the generous farmers at the 441 market.

Instead of the beans and grain we often add to soup, today it was just a grain - but a mighty one: quinoa (pronounced keen'-wa). Next to the potato, quinoa was apparently the most important food to the Incas back in the day, surpassing even maize in popularity. It's unusually nutritious - one of the view vegetables that contain a balance of amino acids, forming complete protein. It's as protein-rich as meat is.  Even though it's not a local food for us, it's good to keep in mind and learn how to use densely nutritious food like this, especially when times are tough.

Here's the "recipe" (we use this term loosely) for today's soup. I've highlighted ingredients that were grown locally.

Directions:
Saute onion in olive oil until transparent; add spices and stir. Rinse quinoa, then drain and add to pot along with vegetables. Cover with water by at least four inches. Bring to a boil, then turn down to simmer till carrots are tender.  Add canned tomatoes and salt to taste. Serve with cheese and/or chives.

I love Quinoa! It's one of our staples... great with veggies like a paella (instead of rice) or added to salads, etc.

Yummm. I've been enjoying quinuoa in various forms down here in Peru.