Bread: Staff of Life? Or Stuff of Hips? 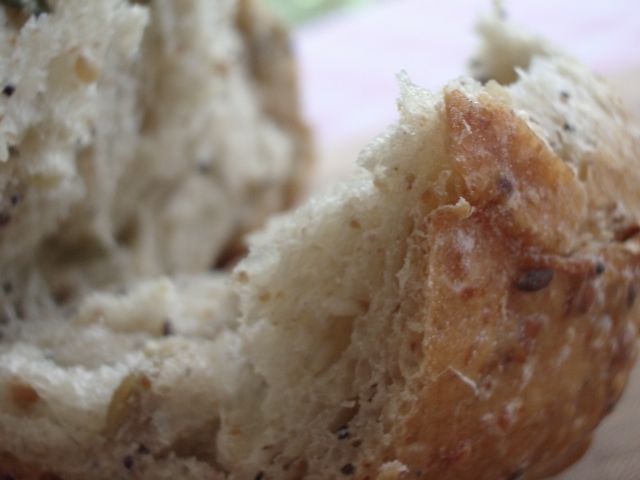 I started baking bread as a teenager for a number of reasons. I was coming of age at the end of the back-to-the-land/Mother Earth News era for one.  And I knew some Mormons.  Plus I really liked homemade bread.  As a little girl, I used to beg my mother to buy the frozen bread dough at the Winn Dixie to thaw and bake for our family.

When I started my own family, bread became symbolic of the kind of life I wanted. Time for it, for instance.  It was now the eighties; the era or workaholism, conspicuous consumption, and "trying to do it all." Slowing down enough to knead bread and wait for it to rise seemed like a good, working metaphor for the life I hoped to create for my family - as were thoughtfulness about ingredients, and the simple happiness that came from cutting into a still-warm loaf and slathering the slice with Better Butter. Around that time, I read Laurel’s Kitchen – a classic vegetarian cookbook that elevated bread to the main ingredient of a healthy diet and a happy home.

It was also the age of the high-carbohydrate diet. We were supposed to eat less fat, less protein and more carbs, and I was all over it. Excess protein was leaching calcium from our bones, and farm animals were eating precious grain that could be feeding the hungry (and my family) much more efficiently. Again, healthy whole-grain bread was the ticket.

And there was the attractive multicultural history - pizza in Italy, nan in India, matzo,tortillas, pita, pumpernickel, hamburger buns!  Bread was what brought us together, what we broke at the table, what nourished us and connected us to one another. Bread = World Peace.  Or at least my little part as a late cold-war era mom of four babies with missiles pointed at them - and at just about every other mother's child. I felt pretty serious about it.

Fast forward a little over a decade and enter the low-carb diet.  I honestly have never given it much thought since its intent seemed to be weight-loss over health, environmental concerns, animal welfare, or family (and world) unity.  But as my aging hips spread along with those of nearly everyone else in our country, I have to wonder how much can be attributed to my fixation with bread.

In my little world, I am kind of famous for bread (in a fifteen minutes of fame spread over 30 years way).  I have saved many a boring or unfamiliar or disappointingly vegetarian meal with homemade bread (because homemade bread is miraculous that way). And I have often baked and served bread publicly at large gatherings. Most recently, I have taught bread-baking and used one of my family’s favorite recipes at the “Breakfast Brigade” and for “Dorothy’s Café.”  People really appreciate the healty soup, local fruit, and the warm, boiled eggs - but they adore the bread.

But there are the hips, , and I am attracgted to Michael Pollan’s advice to “eat food, not too much, mostly plants."  In other words, moderation.  So for now, one piece of bread each day. But if it's going to be just one slice, it’s going to be homemade.

The recipe below will yield four 9x5 loaves.   If you want to be fancy – and possibly famous (locally anyway) - roll out the dough after you divide it and sprinkle it with cinnamon sugar and raisins, or chives, or rosemary, or garlic butter, or jam, or grated cheese.  Roll it like a jelly roll into a loaf.  You’ll get the familiar raisin-bread-swirl in the middle.  It’s good.

In a large bowl, combine the wheat flour with yeast and salt.  In a second bowl, combine water with honey. Add liquid to flour mixture and stir with whisk. Add white flour, a cup at a time, stirring well after each addition until dough is soft but leaves the sides of the bowl clean. Turn onto floured surface and knead until smooth and elastic (about 10 minutes).  Divide into fourths, shape into loaves (see additions above) and place in well-greased loaf pans. Let rise until double (in my preheated oven, heated to 170 then turned off, this takes only about a half hour).  When risen, pre-heat oven to 350 and bake for about 30 minutes till bottoms are light brown. Let cool slightly before slicing.

Ooh, I'll have to try that recipe. Thanks for that post. I have been using a recipe that my friend, Brenda, turned me onto. It can be found here:
http://vegweb.com/index.php?topic=5716.msg77100
It's called "Outrageously Easy Big Bread."

I love baking bread and because it's something I made I try not to worry about the whole carb thing. All things in moderation, right? With a big slop of creamy butter.

Thank you so much! I recently baked bread for Dorothy's cafe and was wondering how on earth I was going to resist calling someone for the recipe! The bread certainly brightened up a rainy Sunday afternoon...

I have been coming to Breakfast Brigade once a month now for a little while, and I have to say it's one of, if not my favorite day of the month! I finally felt inspired to bake this bread today after another awesome experience at Breakfast Brigade. I rolled brown sugar, cinnamon, and fresh apple chunks into it, and my roommates are big fans of the outcome. I just had to tell you how much I love your bread...and your house filled with beautiful people! Thanks for all you do. :)