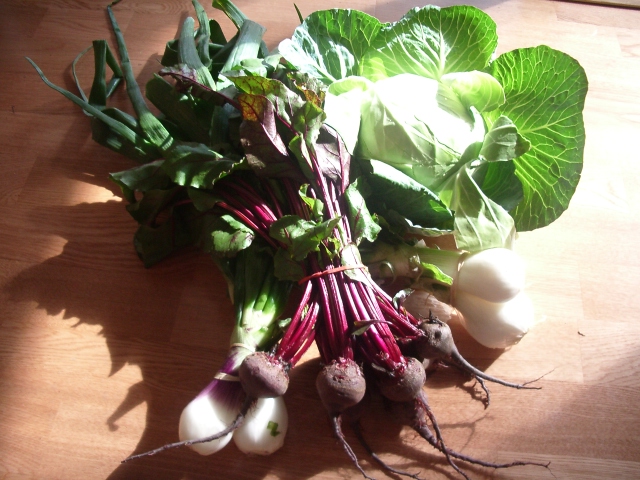 I don't love beets.  But when I saw them at the farmers’ market this week, I bought some anyway. Maybe it was smiling Mr. Graham from Graham farms.  Or maybe because they were so pretty…

Then, strangely, while I was out walking the dog later that afternoon, my neighbor Harold handed me a cabbage.  This doesn't happen normally either. His wife works for the agriculture department at UF, and they had produced some extra ones that needed homes.

That’s when the thought of “borscht” popped into my head – even though I’ve never made it or eaten it.  I thought I might have some of the key ingredients.  And I did!

After searching for borscht recipes in my own cookbooks and on the web, I realized they were going to need some tinkering if I were going to use only local veggies. So, I tinkered – trying to keep the main idea.  And it was good.  It was also beautiful. 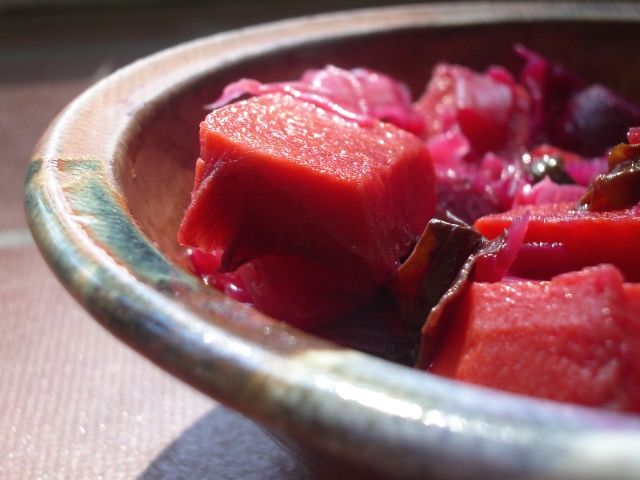 I substituted sweet potatoes for the white potatoes (not in season), the celery (never in season here) and the carrots (rare).  I also substituted local honey for the sugar.  And I had just planted dill, which was a very good addition.

Heat oil in a soup pot and sauté onions and garlic till onions are clear.  Add beets, greens, cabbage, and sweet potatoes along with approximately 8 cups of water and salt.  Bring to a boil, lower heat, cover, and cook till veggies are tender but are not falling apart (15-20 minutes).  Add honey and vinegar. Top with dill and sliced or chopped boiled eggs.

*the oil, vinegar and salt are not produced locally. I could have substituted local butter for the oil (if I had bought local un-homogenized  milk at the market and whipped up the milk fat).  But I don’t think we’re going to be processing vinegar and salt in these parts soon.

Sour cream is traditionally used as a topping for this soup, and I think it would have been a good foil for the soup’s tartness. The boiled eggs did nicely, too, though.  And – to be perfectly honest – I enjoyed this soup more cold the following day.  “Tart” just goes better with cold to me.

Beets are still not my favorite vegetables, but this was really good. The thought of the beets growing out on the Graham’s farm and Harold gifting me with the cabbage – not to mention the jewel-like beauty of the red beets, orange potatoes, and vivid greens  - helped a lot.  I’ll make it again.

This week's locavore meal: farmers' market borscht with backyard eggs, and a variation of the best salad ever (balsamic vinegar in the dressing, and red and green leaf lettuce instead of cabbage and arugula).

So, not exactly what the blog is about, but that is an awesome picture, and actually makes me want to try borscht, which I can't say I have ever before.

That is a good idea, using sweet potatoes - those things are always delicious, and way more flexible than a non-cooker like me would have guessed.

This is such a beautiful image! Is that what you call Digital Painting? It looks stunning.