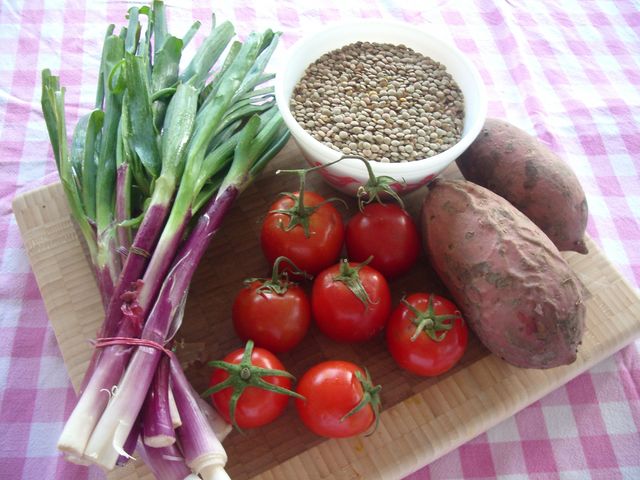 We've been using this recipe for years, for several reasons.  It's quick, it's healthy, and just about everyone likes it (including kids) - despite its unglamorous appearance.

White potatoes are not in season yet, so we substituted sweet potatoes, which are, for both the carrots and white potatoes.  I think this is a big difference in how most of us cook now, as opposed to how our grandparents or great-grandparents cooked back when people relied primarily on things produced locally:  Now, folks who like to cook usually start out with a recipe and go get whatever ingredients are called for. But less than a century ago, diets were much less diverse. Good cooks then would use mostly what was growing, hunted or raised nearby, and create (or tweak) a recipe themselves.  My own grandparents were much more representative of this type of cooking - and thinking. Their meal plans were pretty consistent and consistently southern, what many of us now think of as "soul food."   They made the best (really, the best) of what was close at hand.

Back to the soup: We doubled the recipe, and used green onions from the farmers' market supplemented with an organic sweet onion grown in Georgia (sold at Ward's).  Unfortunately, the closest location it seems lentils are grown (they need cool weather) is the upper midwest and Pacific northwest. So they have traveled quite a distance.  The tomatoes were grown within a couple miles though.  So, again, this meal was "locavore-ish."  We're working on it.

Rinse the lentils and pour into large pot. Add carrots, potatoes and salt, and cover with water – at least two inches over top of lentils.  Bring to a boil, then cover, turn to low and cook for 30-40 minutes. Turn off heat and let steam until sauce is ready.

Sauté onion in olive oil and add spices.  Mix well and cook until onions are clear.  Add salt to taste.  Combine with lentils. Place raw chopped tomatoes on top.  Best if allowed to sit an hour before serving. Serves 6.

Hey Kelli! This is not so much related to this particular post, but I figured you'd be interested in this one:
http://www.celsias.com/2008/02/22/why-eating-a-big-mac-is-cheaper-than-eating-a-salad/

Kind of shows why it can be hard to be a not-McDonalds-avore, of any kind.